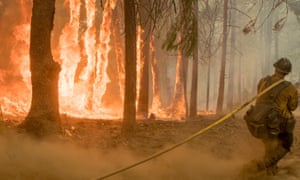 The US interior secretary, Ryan Zinke, has blamed environmentalists for California’s ferocious wildfires and claimed, contrary to scientific research, that climate change had “nothing to do” with them. Instead, he said the fires were worsened because of limits on logging.

“America is better than letting these radical groups control the dialogue about climate change,” Zinke told KCRA, a TV station in northern California, on Sunday. “Extreme environmentalists have shut down public access. They talk about habitat and yet they are willing to burn it up.”

His remarks come on the heels of a USA Today op-ed, published last week, where he held environmentalists partly responsible for the fires because of a stance some have taken against logging. Zinke described it as a responsible means of forest management and called for an increase in timber harvesting, adding that this would also be a boon for the economy.

“This is not a debate about climate change,” he said on a trip to the affected area, the Sacramento Bee reported. “There’s no doubt the [fire] season is getting longer, the temperatures are getting hotter.”

For Dragonflies And Me

Weekly tips & tricks for your garden and home!

Notes and photographs of my morning walks at Seagroves Farm Park in Apex, NC.